skip to main | skip to sidebar

Thank you for being a part of the journey.

Be in prayer for those traveling and those preparing for the Second Tree service in Archbold on Saturday.
at 11:14 AM No comments:

Please be in prayer for those traveling to and those preparing for the first memorial service.
May those in attendance be truly blessed by the message of celebrating eternal life.

One week (and change) now, into the next part of the "journey". So much to say. Still learning so much every day. So many blessings. New burdens. So much I'd love to share. My heart is aching to write again...
In a proverbial "turning of the page", this blog is moving. Some people struggle with the MySpace thing... and I've got to admit, it's a little heavy on ad's and just plain shady stuff for my liking. And, I don't intend to make Ginny keep copying/pasting the way she has (thanks again, by the way, Ginny!)... So, here's where you can find "...another chapter"-- a blog on the life of Daddy and TJ after Leslie's victory over cancer. The URL is:
www.tysonaschliman.blogspot.com
Thanks again, everyone... and I truly hope to see you (virtually, or even better-- in reality) in "another chapter".
--Tyson

p.s. A housekeeping note-- To those of you interested, here is the Memorial Service schedule/plan for Leslie:

Each service will be an open-invitation event. There will be a short "service", which will include some worship and reflection time, and the reading of Leslie's favorite (children's) book, "The Tale of Three Trees". A must-read, for those of you who have kids. The services will start late-morning or early-afternoon, and will be followed by an outdoor reception. The reception will be held at each of the 3 locations, to dedicate a young oak tree in Leslie's memory. The oak tree is just a perfect image of Leslie-- strong, elegant, simple beauty. And 3 trees will do more for the life Leslie has left behind on earth than a single morbid grave site would. And plus... it plays in nicely with "The Tale of Three Trees" theme. Leslie knows/ knew that this would basically be the plan, and is/would be honored. So... here's the schedule. Times to be solidified as the dates near...

Saturday, August 23, 2008- Washington, IL. (Leslie's hometown. Dedication of the "first tree".)
Saturday, August 30, 2008- Archbold, OH. (My hometown. Yes, I know it's Memorial Day weekend. My apologies to any scheduling dilemmas this causes. Start time of the service will be 10a.m. EDT. Dedication of the "second tree".)
Saturday, September 6, 2008- Bolingbrook, IL. (Leslie's last earthly "home", and where her journey became a ministry-- where forever people will remember her and "think of God". Dedication of the "third tree".)
-----------------------
There is an educational trust fund for TJ being set up in Leslie's memory. Please contact me privately if you wish to honor her in that way. My email address is tyson_aschliman@yahoo.com. My home phone number is 630-312-8500.
I want to add that I almost didn't allow the trust fund to happen. I have been convinced by people wiser than me that this IS, after all, a good way for people who have been touched by Leslie to reach some sort of "closure", and offer a gesture that will make some significant long-term difference for her family. HOWEVER... I do want to say, that if you REALLY want to honor Leslie in a way that will REALLY make a difference in your OWN life, and in the lives of others, there is something else you can do... Take your significant other out for a nice dinner. Or a weekend get-away. Or a week on the beach. These are the things that Leslie longed to do over the last year of her life, but was never able to enjoy with me. The first surgery took her sense of taste and smell-- we never again were able to do our favorite thing for "date night". (Spend a whole lot of money on really, really good food and drink, at a unique and dimly-lit restaurant together.) Her health kept us from traveling. Nothing would honor Leslie more than for couples just to love on each other, spend time together, and bring happiness and wonder to their pallets (or sunshine to their faces), in her honor. Couples just don't do enough of that these days, if you'd ask me (or Leslie). If it makes you feel better, email me and tell me about the event. I'd love to hear about it!
Anyway... back to blogging at the new site. Thanks again!
at 8:04 AM 6 comments:

…..OOPs! Didn’t realize there was another epistle….


I took him to a "Tubbies" (Cubbies) game, compliments of "Mimi's Friend Ginny" for an early birthday celebration. The game was actually at "Wrigley North" (Miller Park in Milwaukee-- a little baseball humor there). The Tubbies were playing the Bwoowers. We got there so early the gates had not opened yet, but the TGIFridays on the Left Field Terrace was opened, so we went there to watch batting practice and get some snacks for a bit. TJ was just in awe of the hugeness of the place. He's been to Wrigley already, (already in love with the place), but Miller Park is just so different. He was enthralled with the big yellow slide in left field that Bernie Brewer goes down when the Brewers hit a home-run. And he'd never been that close to the field grass and "baseball dirt" (warning track) before. (His favorite part about baseball is the dirt.) His eyes were just like saucers for the whole hour. Just before we got up to leave, I saw a ball jump off a Brewers bat from the batting cage at home plate, up into the hazy glare of the late-july Milwaukee sky. It looked like it might be coming our way...


*THUD* ... clank-clank.It hit the wall of the restaurant, directly behind where we were sitting. There was a mad scramble among the lookers-on-- half out of fear, trying to get out of the way, and half looking to find the ball, to be the lucky fan to take home a souvenir. I joined the fray. Just before I got up from the dining table where we were sitting, I looked down. The ball had settled right there between my feet. Right under my table. I hadn't even felt it land. I grabbed it and handed it to TJ. He was just amazed."TJ! A REAL BASEBALL! Just like the Cubbies play with!""Is it MINE?" he asked in wonder."Yup!""I can take it HOME with me?" He might as well have asked me to pinch him to see if he was dreaming."Yes! It's YOURS!""It's HARD!" He said. He's used to playing with kid-safe spongy baseballs in the basement.


After the exitement settled a little, the "why-game" started up. "Why did that Bwoower man hit the hard ball to me?" he asked."Well, I think that God made it land there... " I mused."Why?" he kept up his part of the game."Maybe it was kind of like a special gift from Mommy," I continued. "I think that Mommy wanted to be here with us, so she just asked God to make that ball land right between my feet, so you could take it home. She knew that would make you happy." I truly believed that was the right answer, not just a fairy tale to sell to a 2-year-old.He thought about it and then answered, "Or maybe that Bwoower man just saw me and hit it up to me."I laughed so hard. "Maybe it's a little bit of both of those things, buddy."We had a great time. The Cubbies won. We ate peanuts and ice cream and I even shared my Mountain Dew with him. (I know, I know... so sue me!) On the way home late that night, his tummy started hurting. I told him that it was probably from the pop that we drank."Pop can be very yummy, but you drank quite a bit of it, TJ. Too much pop can give you a tummy ache. That's why we don't have it very often. We only have it on very special days like Cubbies games.""Maybe next time I will only have one or two or three sips," he said, after thinking about it a bit. Smart kid, that one is. A little later, his tummy was still hurting, and I was trying to distract him, reaching back and holding his hand and trying to soothe him as I drove."Maybe we won't tell mommy that I had pop," he concluded. I could just feel her glare coming down through the night into the sunroof of my TrailBlazer. "What were you THINKING?" I could hear her say...We made it home. He felt better in the morning. And we headed to Ohio to be with Mimi and Papa (my mom and dad) for a few days. We'd been trying to make it over there for the past few months. But hospitals, doctor visits, and overall health kept us from getting there. We even missed the family vacation at the parents' place in Florida this year. That was crushing for all three of us. We'd been looking for a small window of opportunity to make the road trip down (flying was impossible, due to the state of Leslie's skull and sinuses after all her surgeries). That opportunity never materialized...Until now. TJ and I flew down together yesterday (thanks for the tickets and the free rent, Mimi and Papa!). The trip was very tiring, but now we're having a blast. It's so good just to be alone with him. He has been so sweet, so encouraging to me, and full of love and laughter.

Like I said... an answer to prayer. Every day a blessing.He's sleeping now-- one of his afternoon nap-a-thons-- which gives me some time to think. To breathe. To settle in and dig into this next chapter. I'm learning that God didn't intend for me to tackle all this at once. A man can only feel so much pain in a single sitting. There are only so many tears that can be shed before dehydration starts setting in. And He's given me this wonderful little pace car, (TJ), to keep me from burning out before I reach the finish line.
Posted by Tyson Aschliman at 12:38 PM 1
at 7:27 AM 10 comments:

Leslie's journey of faith took her home to be with Jesus. Where will your journey take you? 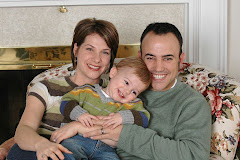 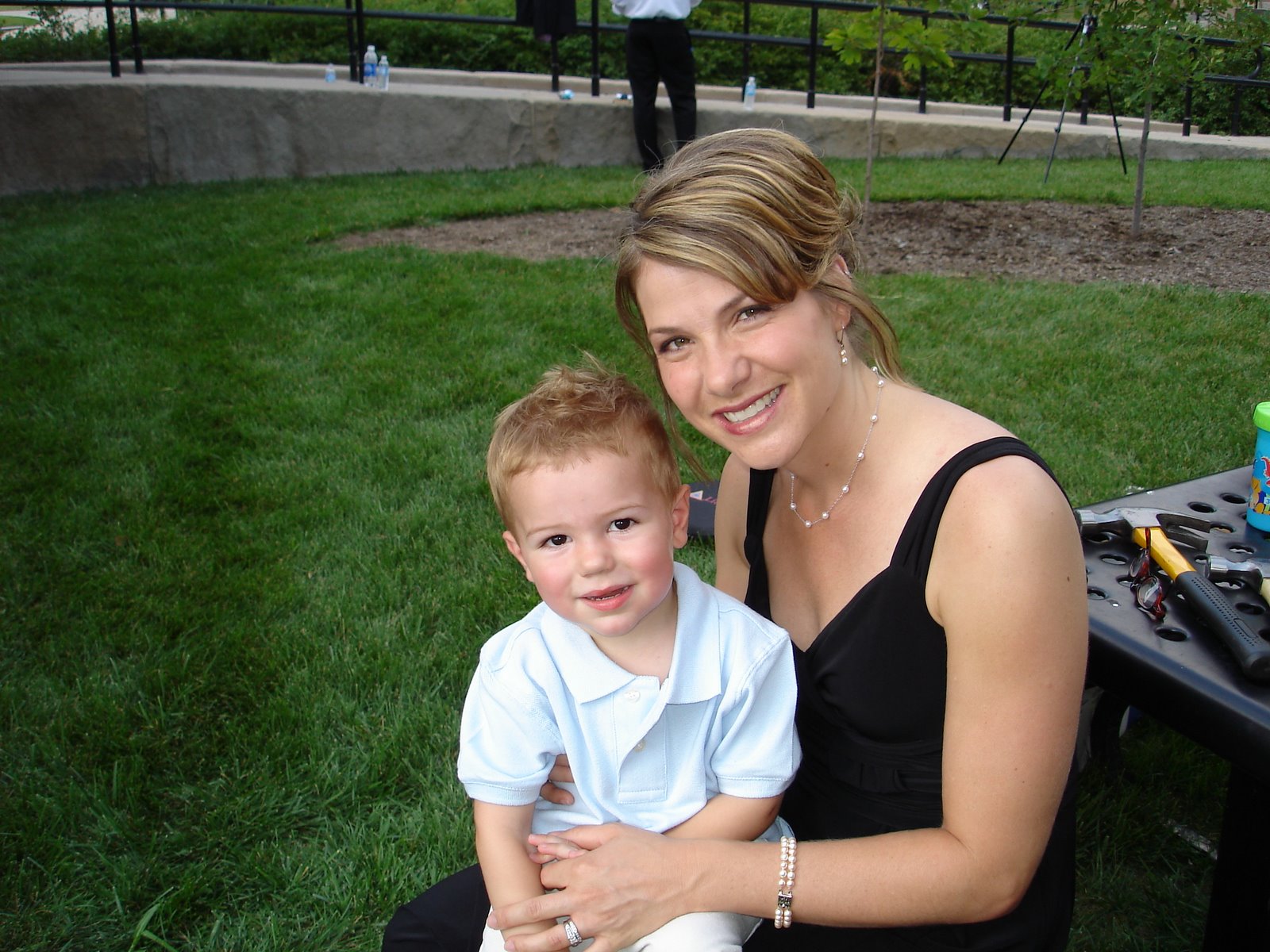 Mommy and TJ smile for a picture at Uncle Tad's wedding 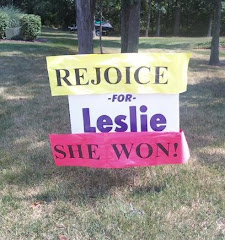 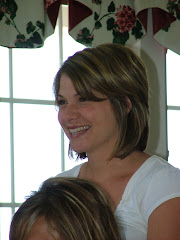 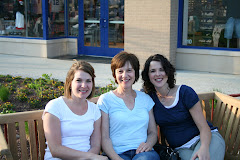 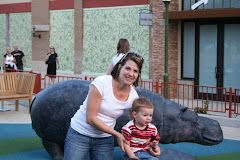 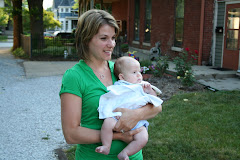 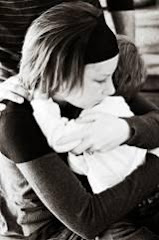 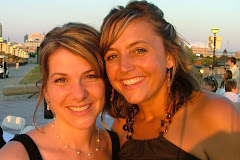 Blessings to you........
About Leslie from a friend: How can someone use less than 1200 characters to express how amazing Leslie is? She is an incredible person and an amazing friend, mom, and wife. If you know Leslie consider yourself blessed. If you don't then continue to read this blog to see how one person has chosen to live her journey...